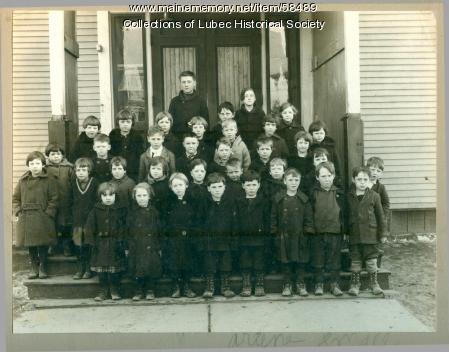 The first-grade class in Lubec posed for this photograph in about 1925.

Names are written on the rear of the mat and are quoted here exactly though the listings do not clearly match the photo.

Written on the back in different color ink is "Arlene E. Small Grade I," on the front in pencil, "Arlene Small" suggesting that this print is from her collection.

The heavy outer wear and lack of snow suggest late autumn. Dating of the photo is possible by the presence of first grader Dorothy Blanch (April 15, 1919 - September 30, 2008), daughter of John and Myrtle (Morong) Blanch. Graduating from Emerson College in Boston, Dorothy performed at the Bar Harbor Summer Theatre, the Off Broadway Theatre in New York City, and the Pasadena Theater before returning to Lubec and decades of local theatrical activity.