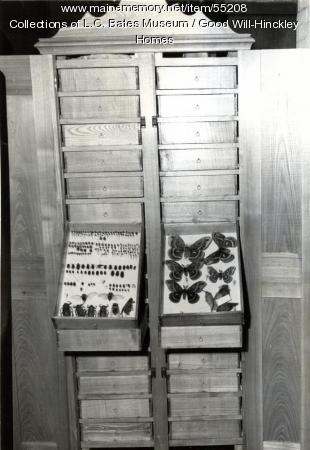 Emily "Mattie" Wadsworth's collection of insects at the L.C. Bates Museum at Good Will-Hinckley as it appeared around 1955. The open drawer on the left contains mostly local beetles, while the drawer on the right contains Cecropia Moths, Hyalophora cecropia, the largest moth found in North America.

Mattie Wadsworth was born on July 26, 1862, and was an amateur entomologist from Manchester, Maine. She became known to entomologists throughout North America and Europe through correspondence and exchange of specimens, and was one of the first women to be published in the journal Entomological News. Mattie Wadsworth's collection is significant because all of the specimens (except those traded for) were collected within two miles of her home.

This small cabinet, likely built by Wadsworth herself, is still on display at the L.C. Bates Museum in Hinckley. It contains mostly butterflies and moths, including some no longer found in the eastern United States. The majority of Emily Wadsworth's collection is housed at the Smithsonian Institution of Washington, D.C. and the Academy of Natural Sciences in Philadelphia.