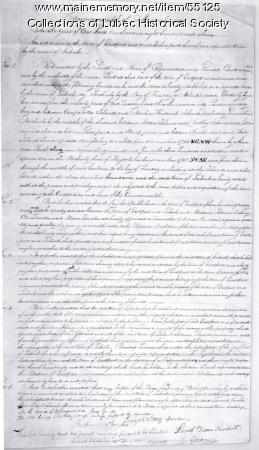 Originally Lubec was a district of Eastport. Residents on the promontory known as North Lubec petitioned the Massachusetts legislature (for Maine as a state did not come into existence until 1820) for “separation” from Eastport as an independent Town.

While the founders specified the spelling as “Lubec,” the Charter was returned as “Lubeck” and appeared in that manner on Town documents for a few years. Massachusetts Governor Elbridge Gerry signed on June 21, 1811, officially creating the Town of Lubec as separate from Eastport, known ever since as “Separation Day.” The signatory of the actual Town Charter was Joseph W. Story, Speaker of the (Massachusetts) House, who within five months became the youngest person ever appointed to the U.S. Supreme Court. He served 34 years until his death.