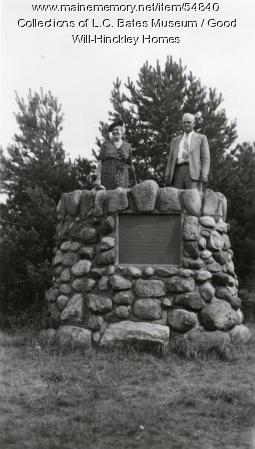 Murray Tablets was constructed on a high point of land north of Uncle Ed's Road, near Applehurst, on the campus of Good Will-Hinckley in 1920. Although M.L. Wagner did the actual mason work on the monument, George Walter Hinckley, founder of Good Will, personally selected the stones used. Murray Tablets featured three slate tablets, one inscribed with a brief biography of William Henry Harrison Murray (after whom the monument is named), one inscribed with a quote from Murray, and one that simple stated "End of the Trail."

William Henry Harrison "Adirondack" Murray (1840-1904) was a clergyman and author of a number of books that promoted New York's north woods. From Guilford, Connecticut, the same town as George Walter Hinckley, Adirondack Murray is known as the founder of the Outdoor Movement.