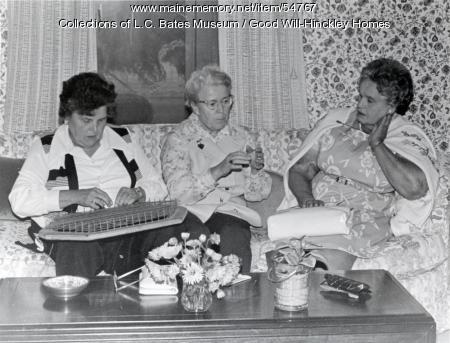 Harriett H. Hinckley, Beatrice Robinson and Dorothy Chase on the campus of Good Will-Hinckley around 1970. Harriett Hinckley was the only grandchild of George Walter Hinckley, founder of Good Will, to be born on the school's campus. She was born April 27, 1913 to Walter Palmer and Nellie Wagner Hinckley at Martenbank.

Harriett attended school at Good Will, and was a member of the class of 1932, the first class to graduate from the new Averill High School. In 1933 Harriett took charge of the L.C. Bates Museum. By 1936 she was teaching music in the elementary schools in Fairfield.

Harriet married Donald Price, son of the long time farm manager Walter Price, in 1946. Although for a short time after marrying they lived in Hartford, they soon returned to Hinckley where they remained for many years.