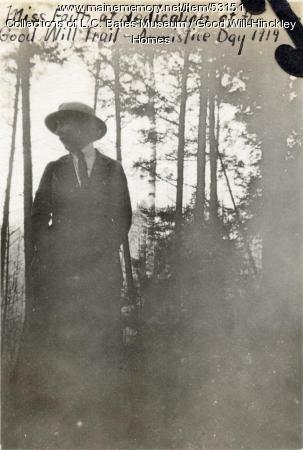 "Miss Faith at dedication of the Good Will Trail - Armistice Day 1919."

Faith was born June 10, 1881 in Oakland, Maine to George Walter and Harriet Palmer Hinckley. After graduating from Good Will schools, Faith spent one year at Oberlin College and Conservatory in Oberlin, Ohio. Upon her return to Good Will she taught in the music department until her enlistment in the Y.M.C.A. in September 1917.

As part of her Y.M.C.A. duties, Faith sailed overseas on the SS Espagne on November 3, 1917. She arrived in France on November 13, 1917, where she served soldiers preparing to go to the front from the port of St. Nazaire. While there, Faith worked out of “The Hut,” makeshift barracks built by German POWs.

After the war the Army of Occupation was ordered stationed in Germany for the winter of 1918-1919. Y.M.C.A. girls like Faith Hinckley provided dancing, entertainment, and cultural experiences for soldiers who had gallantly fought in the war. Parties and parades marked the return of soldiers to U.S. soil.