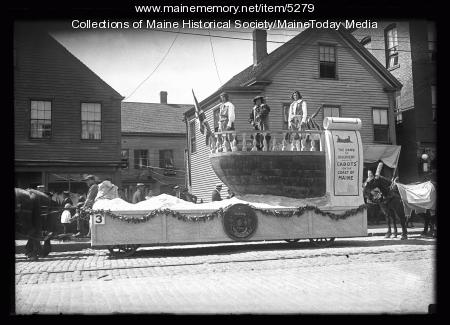 This float #3 in the Maine Centennial Parade, July 5, 1920, depicted John Cabot and his sons, and celebrated the earliest English claim to the coast of North America. Cabot's arrival was used to refute French claims to the New World.

The float won third prize and 25 Continental souvenir half dollars for artistic effect in the Historic Parade.

This photograph, along with others featuring the July 5th floats, was on page six of the Tuesday, July 6, 1920 issue of the Portland Evening Express with the title, "Picturesque Photographs From Monday's Gorgeous Floats Parade."