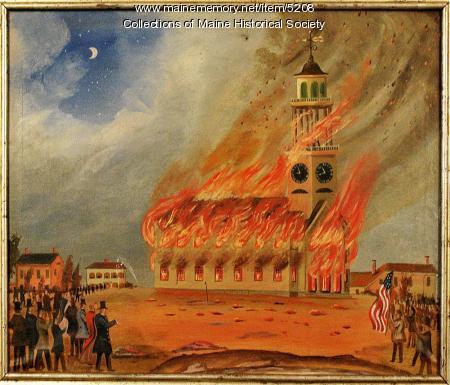 During the summer of 1854 anti-Catholic sentiments were running high. A mob in Bath, incited by a street preacher, ransacked and burned the Protestant church that had been rented by Catholics as a place of worship.

The Know-Nothing party was held responsible for this act.

The hate and bigotry against Irish Catholics in the mid 19th century was chronicled by Mary Agnes Tincker in "The House of Yorke" (1872).

John Hilling was born in England in 1822 and arrived in America in the early 1840s, where he settled in Bath, Maine. He remained in Bath until he enlisted in the Civil War infantry in March 1864. He soon rose to sergeant, but received a horrible spinal injury and was honorably discharged on December 12 of the same year. His spinal injury affected him the rest of his life, in which he focused on painting. Hilling died in Wells in August 1894, and was buried in Bath.