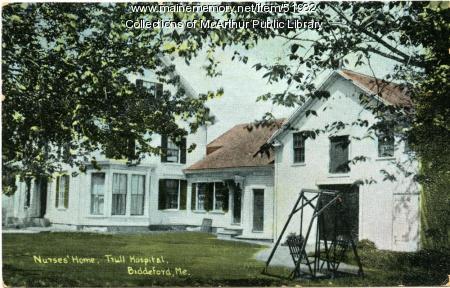 The Emmeline Atwood Home for Nurses was located at 168 South Street, Biddeford, and had private and semi-private rooms plus a dormitory for the nurses of the Trull Hospital on May Street.

The home was originally the family home of Biddeford postmaster Charles Atwood and his wife of 30 years, Emmeline. Mrs. Atwood, a "devoted admirer" of the Trull Hospital, died unexpectedly of heart neuralgia on February 5, 1908. During this time the Trull Hospital was raising money for a Nurses' home. By May 6 Dr. J. Frank Trull announced in the papers that the hospital's new Nurses' home would be named for Mrs. Atwood, and when the new residence was opened officially on June 1, 1908 it was none other than the former Atwood family home. The widowed Charles Atwood had moved out of the home and moved to a home at 314 Elm Street.

The Trull Hospital of Biddeford and many other hospitals offered a course in nursing. Reasons for in-house nursing schools included: the founding of a nursing school would secure a better class of nurses, and provide better care for patients, and would be more economical for the hospital to train its own nurses, which would also prove a convenience and benefit to the county.