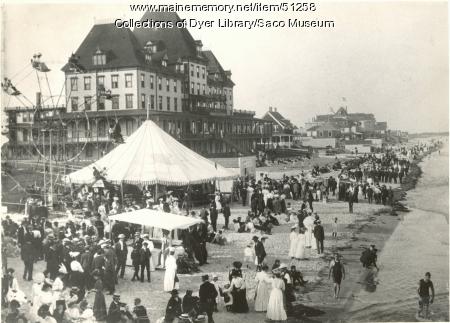 A view of the amusement rides and vacationers along the beach near the Fiske Hotel on Old Orchard Beach.

The Fiske Hotel (1882-1907) held 300 guests, and was built on the site of the Old Fiske and St. Cloud Hotels, which burned on November 10, 1881. It had its own telegraph office, telephones, laundry, orchestra, billiard hall, bowling alley, and 130 rooms on six floors. It also had its own baseball team. There were two Fiske Hotels prior to the third and final, that both were destroyed by fires. This last hotel opened on July 1, 1882, but was doomed to fall to the great conflagration of 1907 like so many others.