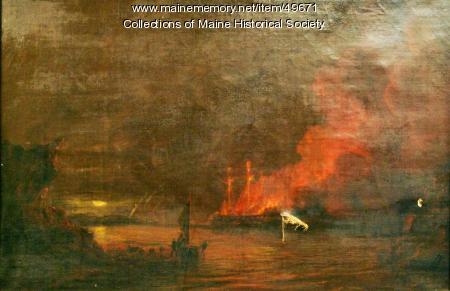 D. Brigham painted the burning on Feb. 16, 1804 of the frigate Philadelphia.

The USS Phildelphia was captured in 1803 in Tripoli Harbor during the Barbary Wars. Lieutenant Stephen Decatur, commanding officer of the schooner Enterprise, was charged with burning the vessel so it would be useless to the enemy.

With a crew taken from Enterprise and the flagship Constitution, plus a Sicilian pilot who was familiar with Tripoli harbor, Decatur sailed from Syracuse on Feb. 3, 1804.

On Feb. 16, he sailed into Tripoli harbor and immediately ordered his men to board the Philadelphia and set her on fire. British Admiral Horatio Nelson said this was "the most bold and daring act of the age."