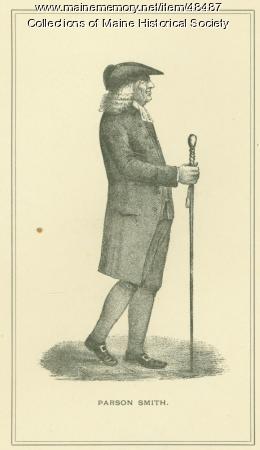 Reverend Thomas Smith (1702-1795) was the pastor of First Parish in Portland for 57 years. During his long life of 94 years, he also worked as a physician and real estate speculator, becoming very wealthy.

At Falmouth Neck (now Portland), Smith responded to the call for sanctioned violence against the Wabanaki. In 1757, Smith and prominent members of the First Parish Church equipped a posse of 16 men. These "scouters and cruisers" were sent to "kill and captivate the Indian Enemy" to the east of Falmouth in the area between the Kennebec and Penobscot Rivers. Shortly after, Reverend Smith noted in his journal the receipt of 198 British pounds for "my part of the scalp money"— equal to one-quarter of his salary.

Smith and other English colonists who founded First Parish Church not only organized genocide of the Native people, they strove to grow personal fortunes by populating Maine with White settlers. The 1755 Proclamation offering bounties to hunt and kill Penobscots was one of dozens of such programs in the Massachusetts Colony’s campaign of genocide targeting the Wabanaki people all across the Northeast region during Reverend Smith’s lifetime.