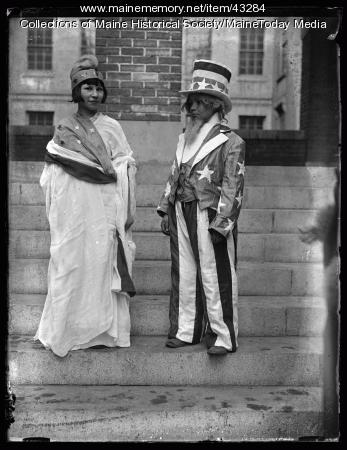 Gladys Moss dressed as the Goddess of Liberty and Nathan Golodetz dressed as Uncle Sam in an Americanization pageant at the Woolson School, also called the Chestnut Street School. This photograph was published in the Maine Sunday Telegram on March 30, 1924, and the pageant was to be repeated at the closing assembly of the Portland Evening School. "The Junior Americanization Class of the day school with entertain the audience with a varied program of songs, recitations and a dramatization of Uncle Sam's Problems, depicting some perplexing questions, and concluding with a discussion of many truths of vital interest to the thinking citizens of today."