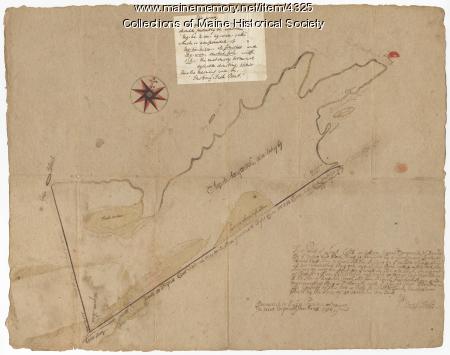 This is a very early map of the area around Bath and a small piece of Brunswick. The Pejepscot Company commissioned the map that is entitled, "Brunswick in the late Province of Mayne in New England, Jan. 28, 1718." Because calendar conventions changed, the date -- in contemporary usage -- would be 1719.

Only the southern tip of the map is in Brunswick.

The note attached later to this map says, "The word 'Ac-que-ha-don-go-nock' should probably be written 'Ug-hi-a-du-ag-qan-ock' which is compounded of Ug-hi-a-du, - it finishes Ag-wan - smoked fish with Ock- the customary terminal syllable denoting place. Thus the meaning will be 'Smoking Fish Point.'"

The Pejepscot Company was formed at a time when the Massachusetts General Court was encouraging settlement and the laying out of townships in the "eastern country," which included the Province of Maine.

The Pejepscot Company laid out Brunswick, Topsham, Lewiston and Harpswell.