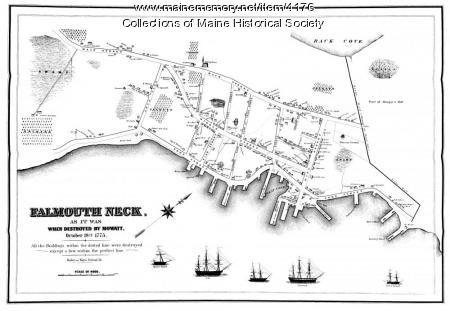 This facsimile map shows how Portland looked in 1775 before the British Navy bombarded it during the American Revolution. At that time, the area that is now named Portland was called Falmouth Neck.

Even though this map covers only a section of the peninsula, it is clear that significant development has occurred since the town's settlement in 1690. There are fewer wooded areas than in the past, and the ones remaining have been neatly tamed into orchards.

In addition, many new streets and buildings have appeared, keeping pace with the growing population. Some of the streets have new names. Queen Street, for instance, has become Back Street, which will eventually become Congress Street.