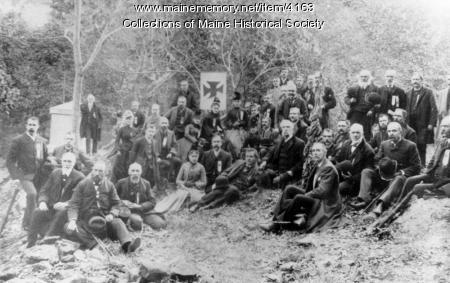 In 1889, Gen. Joshua L. Chamberlain and those who served under him as part of the 20th Maine gathered in Gettysburg.

Wounded six times, Chamberlain received the Congressional Medal of Honor for his defense of Little Round Top, a steep, barren hill of rocks and stones, on July 2, 1863.

Chamberlain is seated at the right of center, framed by the Maltese Cross banner and the regimental flag.

During the 1880s and 1890s, Northern regiments frequently held reunions, erecting several hundred regimental monuments (one of which is seen in the background left).