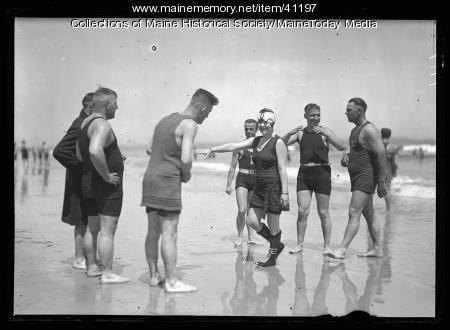 By the turn of the 20th century, Old Orchard Beach was well established as a popular destination. Young people model the typical bathing fashions of the early 1920's, including two-piece swim dress, black stockings, and swim boots. The men wear a shorter version of the two-piece suit, but without the swim shoes.

In the early 1920's, beaches would monitor a women's skirt length with a tape measure to ensure modesty. As the decade progressed, fashion prevailed as swimsuits became shorter and tighter for both men and women.