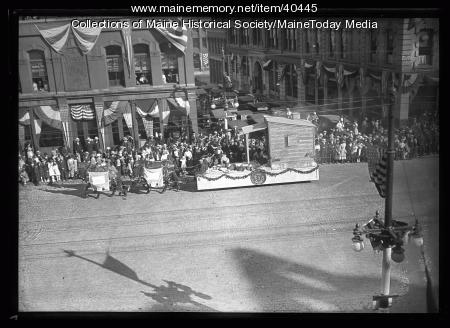 Parade float #8 in the Maine Centennial Celebration parade has the title "The Massacre of Dummer." It looks to be a reenactment of a slaughter or battle. Dummer's War, also known as the Three Years War, lasted from 1722-1725. The war was a series of battles between New England and the Wabanaki Confederacy over Maine Frontier, and there were numerous "bushwackings" which this float could be based on.

The Maine Centennial celebration was held June 26th through July 5th, 1920, in which the parade was lead through the streets of downtown Portland, Maine.