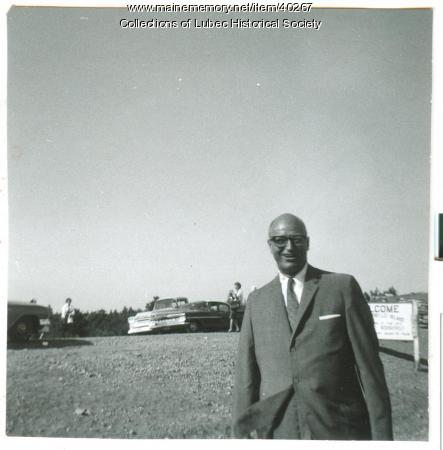 This snapshot of James Roosevelt was taken preceeding the 2:30 PM ceremony opening this bridge. Campobello Island, New Brunswick, can be seen on the distant horizon. Among the individuals participating in the platform party was James Roosevelt (1907-1991) pictured here, eldest son of Franklin and Eleanor Roosevelt, and the last of their offspring to survive. After careers in business, the military during World War II, and an aide to his father, he was U.S. Representative from California’s 26th Congressional district (the San Gabriel Valley within the Los Angeles Metro area) from 1955 to 1965. A windy day judging by his coat, not uncommon along the Lubec Narrows which the bridge spans. Bernard Ross writes, "My wife Eileen took the picture and then Mr Roosevelt came over to us and knelt down to talk with our little girls Sandra and Barbara."