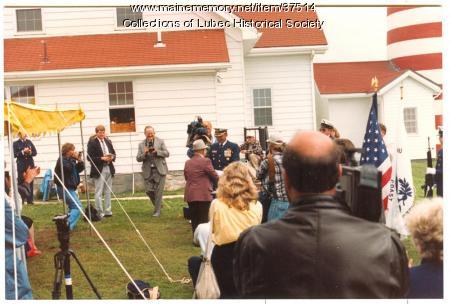 The West Quoddy Light Station was decommissioned on June 30, 1988. Following lowering of the flags, Captain John E. Williams, Commander of the Southwest Harbor (Maine) Coast Guard Base, presented the U.S. flag and, here, the Coast Guard flag to Howard “Bob” Gray (back to camera, in brown coat and felt hat). The retired 21-year veteran of lighthouse service travelled to the site where he served as head keeper from 1934 until 1952. According to an article in the Bangor Daily News of July 1, 1988, Gray “was also given his lighthouse cap which has been in the (Shore Village) museum in Rockland.” After proudly donning it he “gave his cap back to the museum.” Since 2005 it has been displayed at the West Quoddy museum which occupies the ground floor of the old keeper’s house.