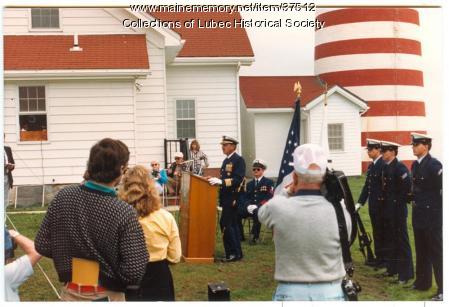 At one time about a thousand lighthouses served as sentinels of safety across the United States. Eventually all but one, Boston Harbor Light, were automated. West Quoddy Light was among thirty with a keeper until automation replaced him on June 30, 1988. Backed by color guard, Captain John Williams, Commander of Southwest Harbor Coast Guard base, commences the official decommissioning ceremony. That last keeper, Malcolm “Mac” Rouse, sits just behind and beyond Captain Williams.