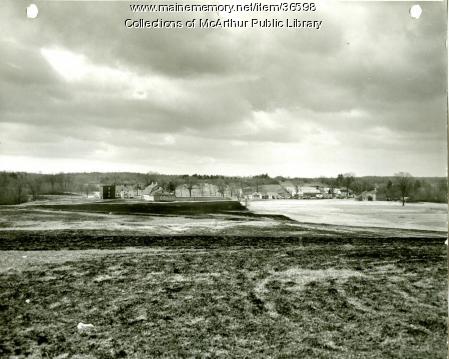 Biddeford's City Farm also was known as the "Poor Farm." The buildings to the left - main house, dormitory, and barns - were located at the convergence of Main and South Streets about a mile from the downtown area.

The farm was a social service provided by the city to people who were out of work, destitute, aged or facing hard times for various reasons. People received food, clothes and/or shelter and in return worked on the farm or doing different kinds of labor (especially road building and the like) for the city.

People in need of help could receive assistance from the city or food from the farm; the poorest and neediest lived on the farm itself. The farm itself was almost completely self-sufficient, and in the middle and late 19th century prided itself on simple but clean accommodations for those citizens who were in need of help for whatever reason.

However, most accounts state that the tenants lived in increasingly meager and unpleasant conditions as the years went on. The farm continued to deteriorate, and was closed in the 1960s amid a scandal due to the squalor in which the poorest residents of the city were forced to live.