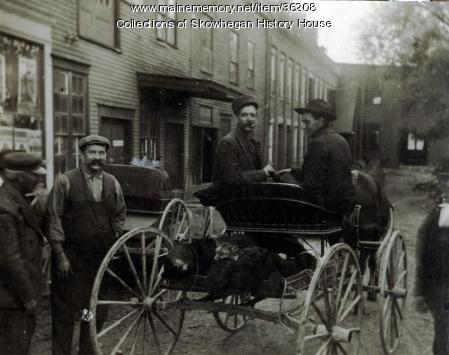 "(Shown through the courtesy of John H. Lancaster)

Man will not recognize this title. The thoroughfare mentioned runs northerly from Water Street, near the north channel bridge. It is frequently spoken of as Mill Street, but its legal name is as above given. The Concord wagon with its load of game is unique, although animals of this character were then and still not infrequently brought into town. Charles Packard, now deceased, shown at the left. At his right is George R. Crocker, now of Kingfield. he was then running a cobbler's shop in one of the buildings at the left of the picture. The people in the wagon are unidentified, but were probably farmers or hunters from Larone.

The buildings in this vicinity have been used for various industries. Long years ago a man by the name of Abbott had a wood working mill here; later the Robinson Brothers followed the same industry.

The Kidder grist mill shows in this picture and at the farther end of the street there is a building which for a long time was used for the manufacture of pulp. The Marston Worsted Mills, at the time of their organization, 1899, were located on this street. All these buildings are now occupied by the Daniel E. Cummings Company, processors and handlers of re-worked wool.