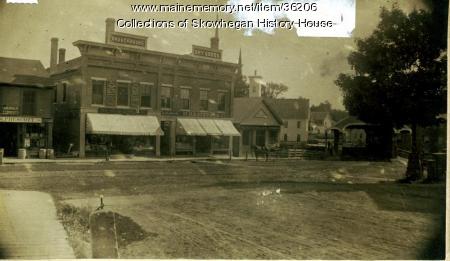 "View must have been taken from center of Madison Avenue.

On wooden building at the left may be seen the sign, "S. Prescott." There must be an "E" to the left, just outside the picture. This was Edwin. S. Prescott, a grocer here for many years. At one time he was in business with S. W. Lawton, and at another time with B. S. Flagg. Mr. Prescott's home for a long time was at the corner of Coburn Avenue and Pleasant Street. Now, rebuilt and enlarged, it is occupied by William Philbrick. A son (or nephew), Standish Prescott, now lives in New Jersey.

The firm of Danforth and Gould, attorneys, had an office on the second floor. The sign, "S. W. Gould & E. F. Danforth", with the words, "Law Office", evidence this face.

The alley between the building just discussed and the brick structure to the right once figured prominently in a law suit, Morrison & McClellan being defendants and the First National Bank being the plaintiff. The Milburn Block had been built where now stands the wooden building. The bank contended that it trespassed on this alley, wish was a right of way or part of their real estate. After much litigation a verdict was returned which indicated that the Milburn Block was actually an inch and a half out of bounds. The owners, by chopping off brick work and sawing away projections (window sills, etc.) were able to "retire" their property within the bounds of its own lot.

The brick building to the right is really two structures, although the upper story and coping is a union proposition. The left hand half is really the old Dyer drug store, but at the time of this picture it was occupied by George Cushing, in the same line of business. It later was bought by the Skowhegan Savings Bank and has been twice remodeled to its present form. An upstairs entrance led to the dental offices of C. E. Richards, over the Cushing drug store. This entire floor is now the office of Colonel Roy L. Marston. The third story is occupied by the Milburn Club, they moving to this structure from their first apartments in the Milburn Block. This same entrance also led to the office of Walton & Walton, attorneys, who were located in the right hand half of this double building. This firm consisted of S. J. Walton, and his nephew, Lyman L. Both were prominent citizens. The first mentioned was for many years supreme in Somerset County Republican politics. He served as County Attorney, as a member of the Legislature and in the Maine State Senate. The other partner, Lyman L., also served in the Maine House. He is now a resident of Massachusetts. The premises just mentioned are now the law offices of Butler and Butler.

The street floor of the block now discussed is more fully described in another picture. It is at present occupied by The Outlet, a dry goods establishment. Previous to that the same business was carried on there by Damase Lafond. At the time of the picture W. B. Steward, also a dry goods man, was the tenant.

The building at the right was the second home of Skowhegan's first bank, originally known as the First National Bank of Skowhegan. The Skowhegan Savings Bank were co-tenants here for a time. This structure, rebuilt, is now occupied below as the office and salesroom by the Central Maine Power Company; second story at present is leased to the American Legion. It was formerly the offices of Walton & Walton, mentioned above.