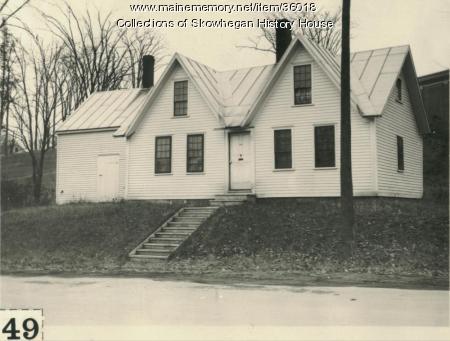 "This is supposed to be the oldest dwelling within what is now considered Skowhegan Village. It is the last of a group of buildings which stood in this vicinity in very early days, constituting what was then known as Skowhegan Falls.

At that period the dam across the South Channel was nearly a thousand feet farther up the river than its present location. This little village sprang up surrounding the mills which received their power from this dam. An additional reason for their grouping here came from the fact that a ferry crossed the Kennebec River from the head of what is now Alder Street to the Davis Miller Landing, near what is now the foot of Coburn Avenue. The latter thoroughfare was not then in existence. A road ran northeasterly from the ferry, across the present locations of Coburn Avenue and Pleasant Street, thus following roughly the valley of Whitten Brook. It crossed this stream just north of Whitten Pond and continued on, striking the present location of Madison Avenue somewhere near the top of Dyer Hill.

In the little community of Skowhegan Falls there were mills, already referred to, several dwellings, a blacksmith shop, a school and church. The latter stood on what is now the location of the E. B. Curtis homestead. This was moved from that point easterly to Baptist Hill. It must have been a considerable undertaking, as there are two deep gulleys on this route. Skowhegan Falls must have been at its prime in about 1800.

The builder and early owners of this house are not known. A meat peddler or dealer by the name of Lane lived there perhaps as early as 1865. A subsequent occupier was Thomas Nesbit, a woolen mill employee, and in later years Mrs. C. E. Norton made it her home.