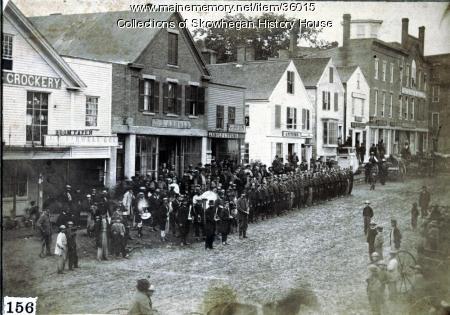 "(Shown through the courtesy of Mrs. A. R. Jewett)

Structure at left is on location now occupied by Dodge Block. Was known as the Arcade Building, on account of the recess and the posts supporting the upper story. Observe the sign of, 'Room Paper,' and under it, 'Farwell & Co.'

On brick building you will observe the sign, 'S. D. Arnold,' He was a dry good merchant. Later years same premises were occupied by Henry Plummer.

On small wooden building you will see the sign of Arnold & Burns. The Arnold was George D. , the son of the merchant just previously referred to. He and Burns undoubtedly kept a grocery store.

The other buildings have been described in connection with previous pictures.

The picture must have been taken on a fete day of some kind. Two very tall men in front of the band are Warren F. Bacon, at right, and Sanford Chase, at left. Smaller and younger man in center is Ross, brother of our present townsman, Charles A. Ross. Group lined up just beyond the band is the Skowhegan Fire Department. The big sign high up on Williams Block is 'Photograph Gallery.' Other signs appearing are, 'William H. Fuller' and 'Albert Fuller.'