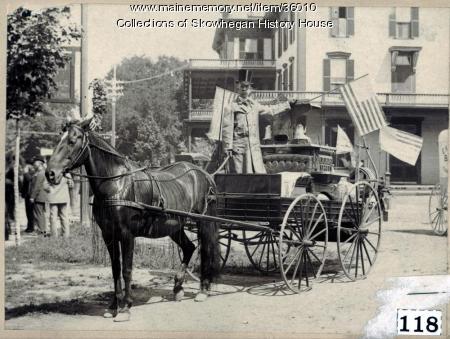 "(Shown through the courtesy of Charles A. Ross) This was taken during the Keene Celebration, so called, in 1892. This was in observance of the opening of the Keene Shoe Factory in Skowhegan. The building, costing about $35,000, was erected by a local corporation, known as the Skowhegan Manufacturing Company, and leased to the Keene. C. A. Ross and his horse, Kitty, are prominent. Mr. Ross was in the stove and tinware business for many years. This team was driven in the industrial parade to announce that fact. Baker's cart which shows at extreme right undoubtedly was that of E. K. Delano, the fist two of the initials showing.