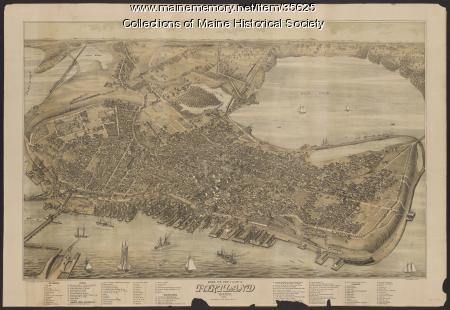 This aerial view of Portland shows the city in 1876 as seen from Portland Harbor looking north toward the White Mountains in New Hampshire.

Numerous details are visible, including ships in the harbor, the buildings and wharves along Portland's peninsula, trains in transit and the open country to the north and west of the city.

Panoramic views were very popular after the Civil War, requiring painstaking work by the artists who walked the city streets, sketching buildings and other landscape features, and then created an oblique view, in this case, as though seen from 2,000 to 3,000 feet above the city.

Joseph Warner was the artist, Charles Shober of Chicago the lithographer, and J.J. Stoner of Madison, Wisconsin, the publisher of the map.