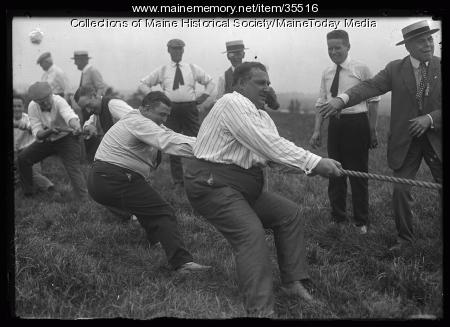 A game of tug of war at the second annual Portland Kiwanis Club outing at Eagles Nest in Scarborough. Captain Edward "Bill" Berry's team, which included former Maine State Senator Francis Flaherty, lost to William Toombs' team, which was rewarded with a box of cigars.

Other prizes at the picnic included a Kiwanis pencil, a 10 lb. bag of sugar, wool soap, a silk necktie, a fancy billiard cue, a sack of potatoes, a can of graham crackers, and a cut glass vase. After the games the men attended a clambake and listened to Chandler's Band, and then drove to Old Orchard Beach to ride in Harry Jones' biplane.

This photograph was published in the Portland Evening Express on August 13, 1920.