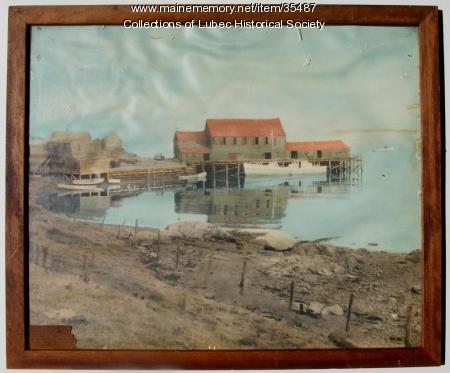 Dan and Paul Morrison operated this smokehouse on Diamond Point, projecting into Johnson Bay from Lubec Neck. Herring, harvested from weirs, were brought to the plant where they were first pickled in heavy brine. Hand-strung on skewer-like wooden “stringers,” the fish were hung in the smokehouse (visible though some of the open doors in the photograph) where smoke both preserved and flavored the flesh. After the smoking operation the herring went to the skinning shed where they were processed and packed for shipment.

One of the Morrison families lived in the “block house” erected ca. 1900 at 16 Diamond Point Lane, said to be the first structure in Lubec using the then-new concrete blocks, cast with a front side resembling stone.

This image is a dye transfer color print from a color transparency, which created a painting-like image. The paper has wrinkled with time.