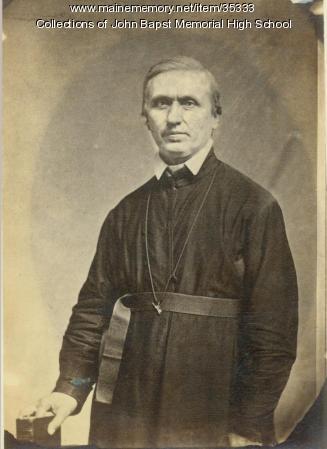 Father Bapst was a Jesuit Missionary who came to Maine in 1853. His first mission was Indian Island, Old Town serving the Native American community, primarily the Penobscots. He was tarred and feathered by the Know Nothing vigilantes in Ellsworth on October 14, 1854, because he insisted that the Catholic students be allowed to read the Catholic Bible in public school, rather than the Protestant Bible, which was part of the curriculum at that time.

He was brought to Bangor to recuperate from his injuries and later built St. John's Catholic Church on York Street. Father Bapst went on to become the first president of Boston College, serving in that capacity from 1863 to 1869.