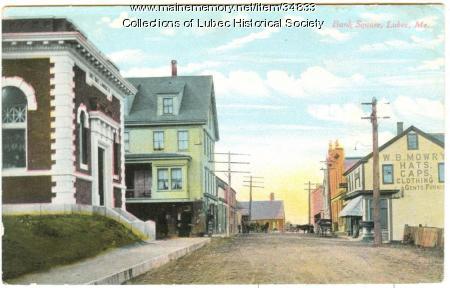 Bank Square, Lubec, ca. 1910 This color lithographed postcard shows Lubec’s Upper Water Street as it appeared about 1910. Note the horse-drawn wagons. To the left, the then-new Lubec Trust & Banking building with its stone sidewalk. Then, beyond Main Street, the Higgins apartment building with shops along Water Street. The building which would house the Lubec Town Office in the 1940s is seen at the end of the street bordering the bay. On the right note the horse watering trough in front of the Mowry building. Beyond is Pike’s Market, shown as it appeared years later as a two-story structure. Though much of the image appears ca.1910, the postcard, printed by Berry Paper Co., Lewiston, Maine, clearly dates from at least a decade later after World War I cut off the previously ubiquitous German lithograph firms. The brick bank building and the Mowry building still exist as of 2010, the latter a restaurant at 12 Water Street. The watering trough also exists, in the Rier Sardine Museum during the late 20th century.