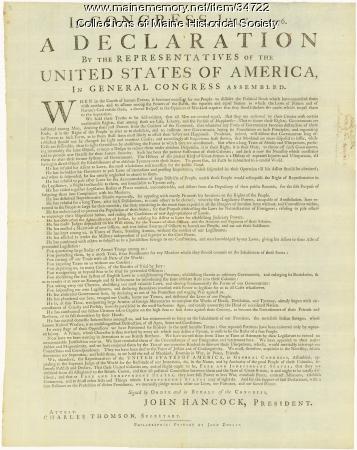 One of 26 known copies to survive from the original printing of the Declaration of Independence in Philadelphia on July 4, 1776. The broadsides, printed by John Dunlap, were not expected to be permanent copies. Dunlap broadsides were the first printed versions of the Declaration.

The Maine Historical Society copy is the first state of the first edition Dunlap printed on the night of July 4, 1776. The Dunlap printing exists in two states. The first state is the official text that was inserted into a blank space in the rough journal of the Continental Congress.

The later handwritten copy that contains signatures was written from the first printed state.

This copy displays a Dutch watermark that is visible upon close inspection around the middle of the page, at the beginning of the Declaration's main text. The mark, which bears a Dutch sigil and "GR," may refer either to "Georgius Rex" or "Groot Rijkswapen."