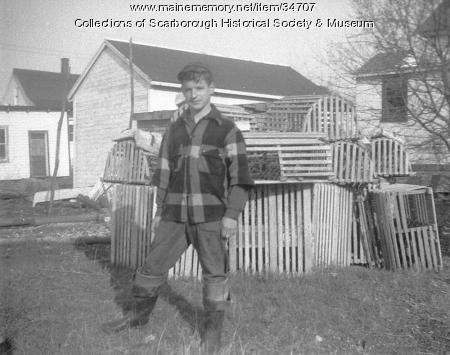 Bruce Thurlow of Scarborough, at age 16, stands by a pile of his repaired lobster traps. These were 36-inch round wooden traps with nylon heads and rope, ready for spring setting in 1953. These traps contained three permanent bricks designed to hold the trap on the ocean floor. However, as each trap was initially set, another three loosely laid bricks were added, allowing the trap to sink. It would not be hauled for two to three days until it had "soaked up" and sank only with the permanent bricks in place.

Most boys who grew up in Pine Point in Scarborough followed in their father's trade, and it was quite common to become a lobster fisherman. Many learned the trade by hauling traps by hand and getting to strings (a string would be anywhere from 2-10 individual traps placed in a lucrative lobster territory) of traps in 16 foot skiffs propelled by outboard motors.