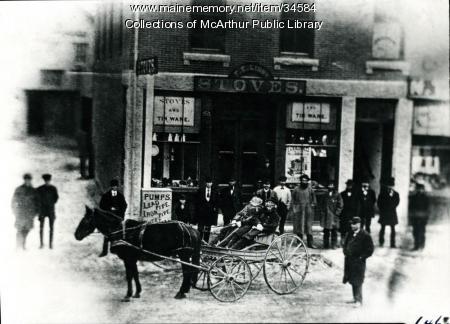 The store of Frank E. Libby stood on Main Street near Pepperell Square in Pikes Block. The two old men in the odd wagon were Eben and Joshua Simpson, whose father, Benjamin Simpson, had been a participant in the Boston Tea Party in 1773 when he was 18. Simpson's Road was named for him. Of the two men standing on the sidewalk, the only one identified is the tall bearded figure, sixth from the right. He was William S. Pettegrove, a butcher and provision dealer. His smock or long apron was the butcher's uniform at that time.