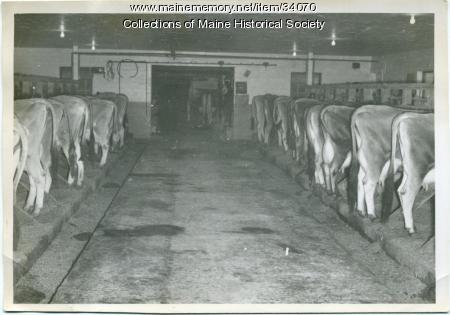 A rear view of part of the dairy herd at Spring Brook Farm in Cumberland.

Ruben Blanchard started farming the land in 1830. His son Frank (1838-1926) joined him after returning from the Civil War. Frank's son Fred later joined his father and took over the farm.

The farm has stayed in the family. Fred's son, Stanley, joined his father in 1935 after graduating from the University of Maine.

Stanley's son, Lawrence joined his father in 1955 after graduating from the University of Maine. Lawrence sold his half of the farm to Gregory Fowler, Stanley's son-in-law in 1972 and Stanley sold his half to is daughter, Katherine, in 1976. The Fowlers continue to run the farm.