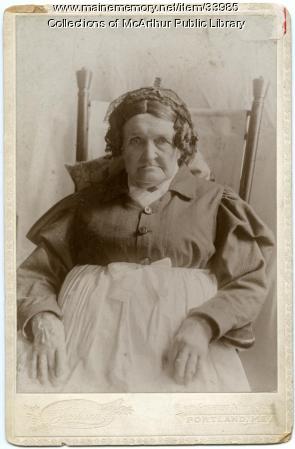 Mrs. Jane B. Thacher, Biddeford and Portland, around 1890. Mrs. Thacher was married to Josiah Thacher (1799-1836), the youngest son of Judge George & Mrs. Sarah Thacher of Biddeford. She was 34 years old when she became a widow, and never remarried. Around 1852 she removed to Portland, where she lived the rest of her life, and in her later years lived with her daughter, Mrs. George Hall, at 82 Chestnut Street. Mrs. Thacher's obituary stated that she was in good health right up to the end, and: "She was as fair and smooth in the face as a girl notwithstanding that she was nearly 100 years old, and she was plump and stout."