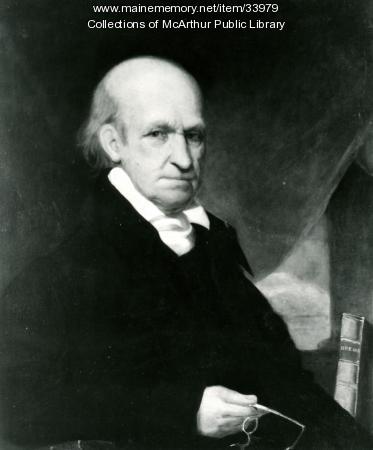 Judge George Thacher of Biddeford, from a painting by American artist Henry Williams, ca. 1820. Judge Thacher came to Biddeford in 1782 and was one of the District of Maine's leading lawyers. He was elected to the Continental Congress in 1787, and served in the new United States Congress for 14 years after that. He resigned his Congressional post to become a Judge of the Supreme Judicial Court of Massachusetts (of which Maine was a District still). He had 10 children with his wife, Sarah. This portait hung in the Macbeth Gallery, 11 East 57th St., New York, New York. The gallery closed in 1953; the painting is currently in the collection of Prof. Gilbert Cuthbertson, Rice University.