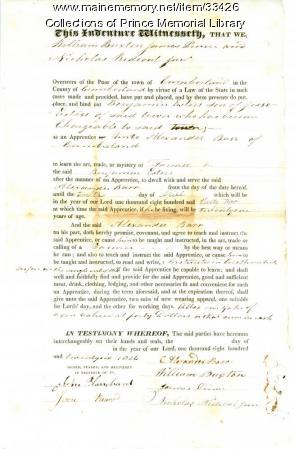 In 1826, the Cumberland Overseers of the Poor, William Buxton, James Prince and Nicholas Rideout Jr., signed an indenture that placed Benjamin Esters, son of Jesse Esters of Cumberland, into an apprenticeship with Alexander Barr of Cumberland, who was to teach Benjamin Esters "the art, trade, or mystery of Farmer," as well as teach and instruct him or cause him to be taught and instructed to read, write, and perform arithmetic. Benjamin Esters was 15 years old in 1826, and was put into the care of Alexander Barr until April 12, 1832, when he would turn 21. At the end of the indenture, Benjamin was to receive "two suits of new wearing apparel, one suitable for Lords’ Day, and the other for working days. Also one yoke of oxen valued at forty Dollars of that sum in cash..."