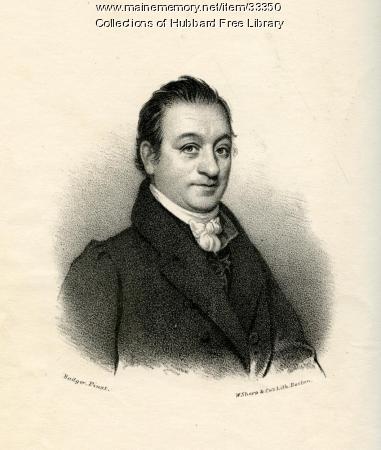 Dr. Benjamin Page, Jr., was born in Exeter, New Hampshire, educated at Exeter Academy, studied under Dr. Kittredge of Andover, Massachusetts and began his medical career in Hallowell in 1791. He was one of the first doctors in the area to deliver babies and this put him in conflict with local midwife Martha Ballard. Several entries in her diary refer to Dr. Page in a derogatory manner, noting she was the one who saved mother or child when he encountered life-threatening delivery problems.

Dr. Benjamin Page, Jr., gave the first smallpox vaccination in the United States ca. 1800. Dr. Benjamin Vaughan of Hallowell acquired the vaccine from his friend Dr. Edward Jenner. Dr. Page's historic actions were recorded in The Boston Medical and Surgical Journal, Wednesday, October 1, 1845, Vol. XXXIII, No. 9, in an article titled "Memoir of Benjamin Page, M.D., 1770-1844: ...he was furnished with some vaccine matter by his most intimate and attached friend, Benjamin Vaughan, Esq., who had just received it directly from the hands of Dr. Jenner, of London. He immediately made use of it and was the first American physician, be it known, who applied the vaccine virus to the arm of a human subject in this country."