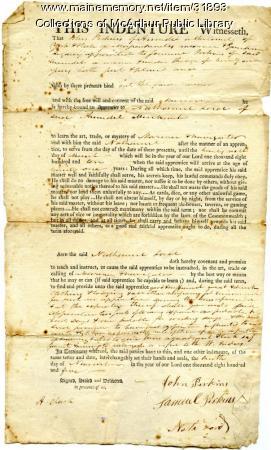 Indenture contract in which John Perkins apprentices his guardian, Samuel Perkins (age 16) to Nathaniel Lord of Arundel in 1805, to learn the "art, trade or mystery" of Mariner and Navigator.

The contract stipulated that Perkins would serve his master faithfully and would not waste his resources: worse yet, he wouldn't "haunt taverns, ale-houses, or gaming places" or get married for that matter. In return, he would be taught the arts of seamanship and navigation, and at the end of his term he would be provided with a couple of new suits of clothes, a quadrant, and a book sufficient that he would be able to navigate to the West Indies, one of the main stops on the coastal trade during this time.