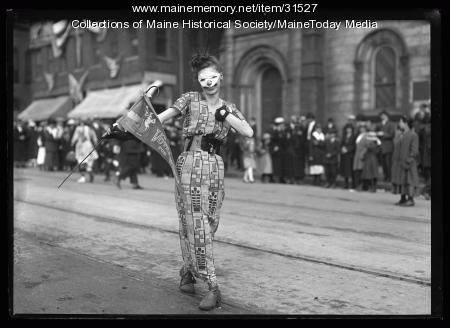 Before the Maine Centennial Parade held in Portland in 1920, a group of residents held the Parade of Horribles, a popular parade genre that often included humor about various topics.

This woman, dressed in a mask and patterned jumpsuit, carries a pennant, produced by the Women's Political Union, proclaiming "Votes for Women."

While the woman suffrage issue was only about a month away from ratification, the topic still garnered discussion.


This photograph, with a collection of others from the parade, was on page twenty-two of the Tuesday, July 6, 1920 issue of the Portland Evening Express with the title "Indicative of What the Camera Can Stand--Views of Monday's Parade of Horribles."