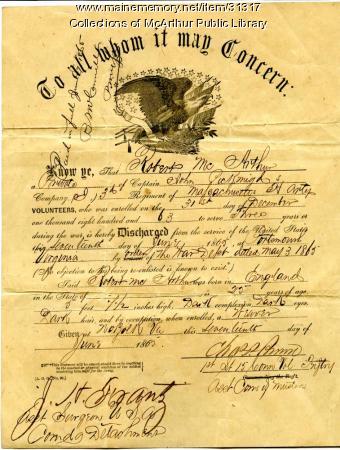 The U.S. Army discharge paper for Robert McArthur, dated June 17, 1865. McArthur was 25 years old when he was discharged from the U.S. Army due to the ending of the Civil War. He served in Company I, 3rd Regiment of the Massachusetts Heavy Artillery Volunteers after serving a little over a year. After the war McArthur returned to his job as a mill worker, moving around Massachusetts and Rhode Island until he settled in Biddeford. He was agent of the Pepperell Mills for many years, and a benefactor to numerous city organizations, including the public library which was named for him.