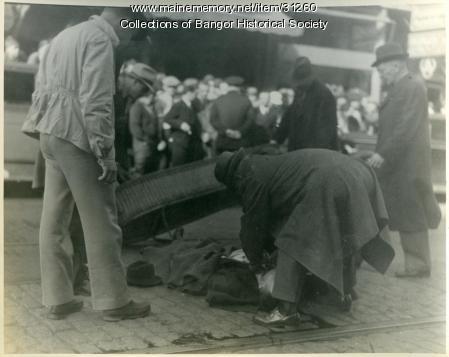 FBI Agent I.E. "Bill" Nitschke, at left in the light jacket, supervises the removal of the body of Alfred Brady who was shot by FBI agents. The shooting occurred in front of Dakin Sporting Goods Company at about 8:30 am on October 12, 1937.

The Brady Gang was wanted for multiple murders and robberies. They had purchased firearms and ammunition from the Dakin store and asked if it would be possible to purchase a machine gun. Store owner Everett S. "Shep" Hurd became suspicious and alerted the authorities.

Law enforcement officials, led by FBI agents, set up a stakeout for the criminals who were planning to return to the Dakin store to purchase the machine gun which they had been told by Mr. Hurd had been ordered. The shootout occurred as law enforcement officers attempted to apprehend the gang.

Gang member Clarence Lee Shaffer, Jr. was also killed. A third member, James Dalhover, was arrested, returned to Indiana for prosecution, and executed a year later. The Brady Gang was from Indiana and committed most of their crimes in the Midwest. They had been staying in Bridgeport, Connecticut and traveled to Maine to purchase firearms and ammunition where they thought they would not be easily detected. No one other than the two criminals were killed in the incident.