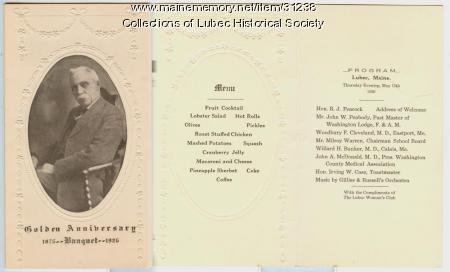 Golden Anniversary program by the Lubec Woman's Club honoring local physician, Dr. Eben H. Bennet (1848-1944). Eben Bennet began practicing medicine in Lubec after graduating from medical school in 1876. Bennet was also active in the community, especially with the school where he long served as a Director and also as Superintendent.

He donated land for Lubec Consolidated School’s athletic field, named in his honor. His practice extended to Campobello Island, where he treated among others the Franklin Roosevelt family; he was the first physician to examine the future president after he contracted polio in August 1921, accompanying him by train back to New York City.

In her nationally syndicated newspaper column “My Day,” Eleanor Roosevelt wrote in 1944 that Dr. Bennet was “a very great person.” His son, Dr. DaCosta Bennet, carried on the venerated tradition of the small town doctor, practicing in Lubec almost until his death in April 1975.