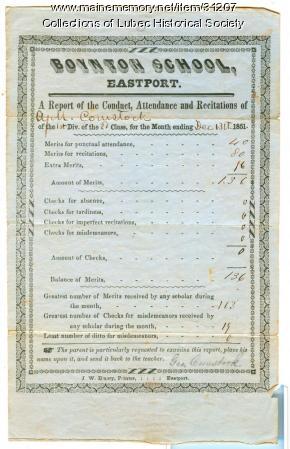 Dated December 13, 1851, this report card for student Aprill? Comstock was signed by the parent, Geo. Comstock. According to the 1888 book "Eastport and Passamaquoddy" by William Henry Kilby, Boynton School was founded on May 28, 1847, “an important event in the history of public schools in Eastport.” The school was erected on the site of the previous “Old South” School which burned in 1846. The new school was named for Caleb Boynton, one of the earliest residents of Eastport who had donated the land for the previous school building.