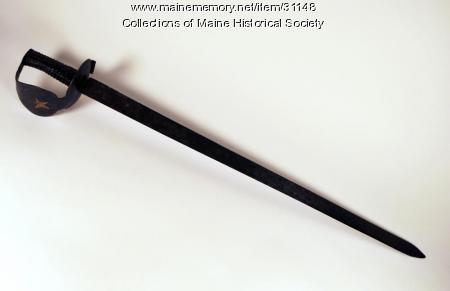 A British naval cutlass, probably made about 1804.

Josephine O'Brien Campbell of Cherryfield gave the cutlass to the Maine Historical Society in 1909, with the notation that it had belonged to her relative, Col. Jeremiah O'Brien, the captain of the Unity that captured the British sloop Margaretta on June 12, 1775 in Machias.

The donor believed O'Brien got the cutlass from the captured British ship.

However, markings on the cutlass indicate it was not made until later. It may have come from a British ship during the War of 1812.