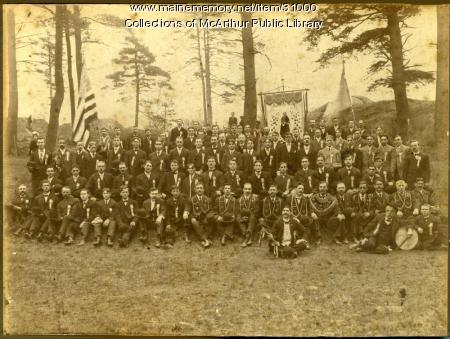 L'Institut Canadien-Francais (French Canadian Institute), Biddeford, ca. 1900. This club was established in Biddeford in 1868. In 1900 the club met the second and fourth Mondays of each month at the Marble Block, 85 Main Street. The president of the club was Octave Dubois, and the recording secretary was Eugene Lapine. The original Institut Canadien de Montreal was formed in Canada in 1844, by a group of young Franco intellectuals, and was the center of a great controversy because of the books in its library, of which many were banned by the Catholic Church. The Church denounced the society, and in 1858 a group wishing to appease the Church formed L'Institut Canadien-Francais de Montreal, which followed Catholic doctrines and decrees. The motto of the Biddeford Institut was "Concordia salus", or, "Salvation through harmony," which is also the motto of the city of Montreal. The Biddeford group also displays a number of religious icons on their regalia.