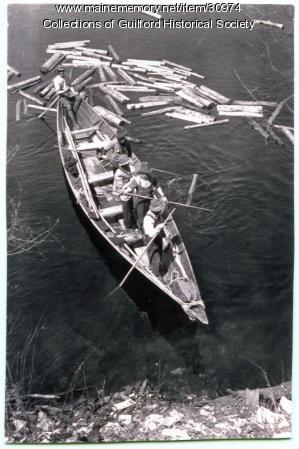 Five men are clearing some hung up logs in this bateau during the annual river drive on the Piscataquis River in Guilford. As logs made their way down the river, many of them were caught in snags, eddies, and backwaters, so men in bateaus were sent after them. Wielding long poles with iron tips, the drivers, as they were referred to, forced the logs back into the current and sent them on their way. This was extremely dangerous work. The Pierce Memorial in the city of Bangor was erected as a tribute to the skill and courage of these men.