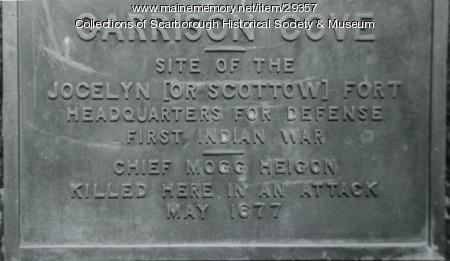 This historical marker is one of a series of markers depicting Black Point history. This is located across from 534 Black Point Road, Scarborough. "The stone marks the area where the first Scarborough garrison was built. Joshua Scottow, who owned a great deal of the town, built the fortification to defend his interests. In October 1676 while Scottow was in Boston, Mogg Heigon and other Indians took the fort without firing a shot. The fort was ransacked but not destroyed. Scottow and the other townspeople returned, and the following May, Mogg again besieged the fort. One of the garrisoned men was captured and tortured; three others were shot and killed. On May 16 Mogg met his end, shot by Lieutenant Tippen of Boston. The siege was broken."

The above quotation was taken from the book "Scarborough at 350: Linking the Past to the Present" edited by Susan Dudley Gold. This marker stone was laid in 1931.